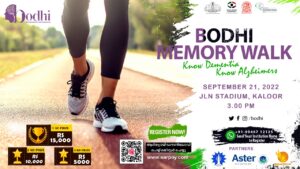 Bodhi memory walk is an awareness program implemented by the Kerala government, which had made the Kochi corporation the first corporation in the country to be declared dementia patient- friendly. On 21st September which is observed as world Alzheimers day, Bodhi- CNS CUSAT, District administration Ernakulam and social justice department, Government of Kerala organised a memory walk at kaloor International stadium, kochi.
The Department of Psychology and NSS team of Nirmala Arts & Science, Mulanthuruthy clubbed together and participated in the memory walk with lots of enthusiasm. The team also performed flash mob during the program.